THE biggest anti-bullfighting protest to date took place in Madrid this weekend. 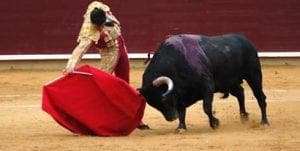 Thousands of protesters gathered in anger in the capital, with placards saying “Bullfighting, the school of cruelty”.

The incensed crowd, have rendered it a ‘bygone tradition’ and are calling for the traditional Spanish sport to be banned.

Animal rights group PACMA, who attended the rally, have been increasingly active in their efforts to stop the ancient pastime.

A demonstrator, Mari Paz Rojo, a 42-year-old administrative assistant said “We don’t want Spaniards to be identified with bullfighting, this is not our national fiesta”

This comes after the sport being banned completely in Catalonia in 2011.