AN expat security boss is warning people to be vigilant of a ‘shocking level’ of drink-spiking on the Costa del Sol.

In just six months since setting up his private security firm CP Marbella, he claims to have heard of at least 15 victims of the crime.

In addition to the use of GHB to drug and sexually assault women, he warns of an increasing trend of gangs using women to drug male tourists with ketamine, a horse tranquiliser, that makes them powerless and easy to rob.

James Hickey, 36, says he is so shocked at the increasingly brazen approach of the criminals, that he felt he had to speak out.

“It’s very worrying as it seems that anyone is a target,” the former Royal Green Jacket soldier, told the Olive Press.

“What we are seeing is an increase in gangs using women to flirt with men before spiking them and robbing them.

“A police contact has warned me that crime related to spiking is very prevalent along the coast,” continued Hickey, who moved to Estepona after working in the Middle East for the past eight years.

“People need to make sure they are looking out for each other.”

One recent victim includes holidaymaker Darren Parker-Meade, who was enjoying a few of drinks with friends in Fuengirola when he claims to have been drugged.

He told the Olive Press that he was accosted by a woman down a quiet side street, who blocked his way before he was hit over the back of the head and robbed.

“I remember walking and feeling like I was having an outer body experience, I have never been in a state like that, which is how I knew something was wrong,” said Darren, 49, from Birmingham, who was on holiday with eight pals.

“I then got separated from my friends somehow, which has never happened to me before.”

The account director suspects he was targeted because he was holding on to the group’s kitty, which was being used to buy rounds of drinks.
While the cash, around €150, was stolen in the attack, oddly they didn’t take his wallet or phone.

“I did fear for my life a little because I had no idea what was going on,” he said, “I remember a British voice saying ‘don’t move!’ before I passed out cold.”
Darren woke up the next morning in Malaga A&E, with four stitches in his head and a bad headache.

“I was left unconscious in the street and very lucky some anopeople were there to help.”

“It has definitely put us off coming back to the Costa del Sol and I would advise anyone going out with their friends to be on alert at all times.”

This weekend, an elderly British expat couple from Estepona were drugged with Ketamine in Puerto Banus.

The pair, who are neighbours of Hickey, were robbed of their jewellery and watches while in a semi-conscious state.

“They were taken to a quiet corner in the port, where they were robbed,” said Hickey.

“You have to be really vigilant out here. I hope people take heed.”

The Olive Press launched a campaign to address drink-spiking in 2014 after we revealed Spanish police had no records for the crime. 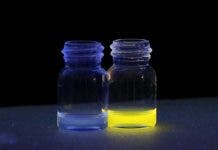