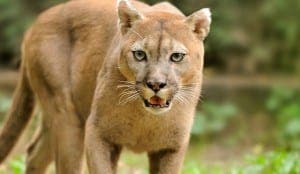 FOR years we’ve been told that we would reap what we’d sown with our uncaring attitude to the planet.

That global warming would come back and bite us on the collective derrieres is we kept on going the way we were.

And now it seems that certain species have decided to take matters into their own hands.

First off was the reported sighting of a big cat, possibly a Puma, on the loose in Estepona.

It even made the papers back in the UK . We’ve become used to the sight of Cougars in Banus recently. But that’s usually the drunken Mum at her daughter’s hen party.

Over in Gibraltar the Barbary Apes have a well deserved reputation for waging guerilla (or is that gorilla?) warfare on unsuspecting tourists. I once saw an ape pull off a brilliant flanking attack on a French visitor on the top of the Rock. The monkey had blindsided the Frenchie for his baguette and was gone before you could say “Sacre Bleu!”

Living up at the Casita on lake, I’ve had various run ins with the flora and fauna over the years. These have ranged from the comical – including finding a bat living in my roof beams as well as chasing a paniced partridge around the living room, (not the first time I’ve chased a desperate bird around my house) to the scary.

Running over a wild boar at 3am on the road up to Istan in my 4×4 wasn’t fun, although it was presumably less fun for the afformentioned boar. And no I didn’t stop and lug his body back to the house, just in case his older and angrier brother was about.

And now there are reports of a shark sighting just off the beach in Fuengirola. “It was like a scene from ‘Jaws’ one holidaymaker said: “It was very scary at first.

“There was a real commotion at the shoreline as everyone tried to get out of the water as fast as they could.”

You could, of course, argue that there have been sharks on the Coast for decades.