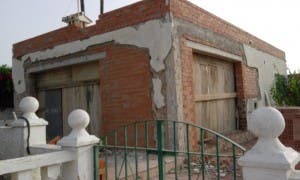 A MANILVA resident has allegedly attempted to extend his property to two floors with a licence that only allows for ‘internal decoration’.

The homeowner is said to have begun building a small walled perimeter around the top of the property and has now installed a flat roof.

Residents of the Hacienda Guadalupe urbanisation are in uproar over what they see as an illegal extension.

“This is in total breach of the civil code and is not in keeping with all the other buildings, it’s like having a blue house in a white village,” neighbour Peter Fake, 61, told the Olive Press.

“People standing on his roof can see right onto my garden, it’s an invasion of my privacy.”

Mr Fake claims the homeowner has failed to put up any notices prior to or during the new works and failed to install health and safety notices, which he says is required by law.

After requesting evidence of his neighbour’s licence, Fake was shocked to discover it only allowed for ‘internal decoration’.

He said: “He has begun building one side up, he’s obviously building another floor and once it’s done it’s done, and mine and a lot of others’ views will be ruined.”

Stirrup says a council officer has informed him that the license is legal if the walled perimeter is only 50cm high, but Stirrup and Fake say they are now at least two metres high.

“We just don’t know what to do at this point, it seems like the rules don’t apply to him,” Stirrup added.

A Manilva town hall spokesperson told the Olive Press: “For legal reasons we cannot confirm whether or not this building is being built illegally.”

They added: “It is not required by law to put up notices of your works or to inform your neighbours.”