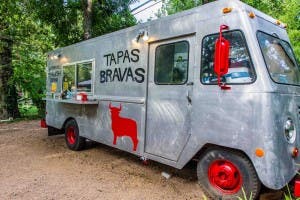 SUMMER 2016 was the summer of the food truck fair.

It seemed that any piece of open ground had a food truck event at one point. For those of you who aren’t aware of what a food truck is, they generally tend to be a VW camper van or retro Citroen van that has been revamped and generally dishes out noveau type cuisines – a quirky take on the taco, gourmet burgers, that kind of thing.

These are, of course, a million miles away from the type of food that I’ve grown up with being served from food trucks.

My experience, if I’m honest, tended to be from a kebab van outside the pub at just after closing time – some frankly undefinable meat smothered in thermonuclear chilli sauce and with a couple of straggly lettuce leaves in a token nod to salad.

The main aim of eating it was to soak up the copious amount of Stella Artois that I’d drunken and often it failed.

Nothing can compare with the gastronomic horror of waking up, horribly hungover, face down in a half eaten kebab. Though I once almost drowned in a bowl of chilli con carne in a Mexican restaurant when I slumped forwards into it after too many jugs of Margaritas, but that, as they say, is a different story.

My other experience of food truck style dining came several thousand years ago, when I was at school. Every lunchtime an ice cream van would pull up outside the school gates and its owner, the legendary Stan, resplendent in White Coat, would sell 99 Flakes and others to the mob of excitable schoolboys.

Lunch money that was supposed to be spend in the school canteen was diverted to Stan’s van and, off our little heads on sugar rushes and additives, we would return to wreak havoc on the afternoon lessons.

I’m sure Stan would have been banned on Health and Safety grounds these days, but perhaps the headmaster was getting a kickback…

So I was a little immune to the Food Truck Fever that gripped the coast this summer. In Spain we’re spoiled for choice when it comes to cheap, unpretentious street food in the form of tapas.

As you are no doubt aware, because you are all clever people, the tapa started out as something free to keep the flies off your drink, and when I lived in and around Antequera (A time I now refer to as my ‘Year in Provence’ period) they were still free. And they were normally excellent.

Only once were we served bad tapas, in a restaurant on the coast. They were so awful that one of our party likened it to a scene from ‘Gladiator’.

“Whatever comes through those doors boys” he said, glancing fearfully towards the kitchen “We stand a better chance of surviving if we all stick together!”