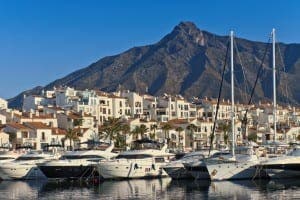 MARBELLA, shining star of the Costa del Sol and destination of choice for the rich, famous, and wannabe, has had a tough time over the past few years.

‘La crisis’ hit it harder and faster than many of its Mediterranean peers and it has taken the town almost a decade to bounce back, but now it is doing so better than most.

Since 2005, the slow hand of justice and the Spanish government have finally caught up with the corruption that riddled the Town Hall for decades, sending dozens of politicians to prison, dissolving the Town Council, and washing Marbella’s dirty (money) laundry very publicly.

Tourism numbers and house sales first faltered then fell sharply, as the national market nosedived, and overseas holidaymakers and property buyers traveled further afield in search of better value for money as prices, for everything from a coffee to an apartment, boomed to busting point in the first half of the noughties.

And, last November, add insult to injury, the Spanish Supreme Court overturned the 2010 municipal urban planning laws, sending the town back in time, Return to the Future-style, to 1986 and leaving thousands of residents in legal limbo.

Amid the weed-littered ruins of speculators’ get-rich-quick schemes and sunseekers’ dreams, Marbella began to look down-at-heel, rather than well-heeled, and a lot less appealing to those looking for a place in the sun, both for a fortnight in the summer and, in some cases, for the rest of their lives.

The local property market halved in size from 2006-9, with the total number of transactions plummeting from 4,432 to 2,199. And tourism numbers shrank, as Spaniards stayed at home and sweated out the summers, while foreign tourists took ever more economical long-haul flights to far-flung, exotic destinations that made cheaper piña coladas and where the living it up was even easier.

By the end of 2015, however, things were taking a turn for the much, much better.
Nearly 4,400 (4,396, to be exact) properties changed hands in Marbella in 2015, despite lingering uncertainty about town-planning guidelines and the challenges that still lie ahead of the new, cash-strapped but clean, Town Council under Mayor José Bernal, at the head of a four-party coalition.

In October, Mayor Bernal announced that Marbella had generated a budget surplus, rather than a black hole, of €46.5 million to date. That was more than enough to pay back, ahead of schedule, €19 million in debts to private-sector lenders, saving €6 million in interest; has reduced its outstanding Social Security obligations by €14 million and the period to liquidate what it owed in back payments by two years.

In terms of tourism, while rivals like Morocco and Turkey have suffered due to the threat, real and imagined, of terrorism over the last couple of years, Spain has been making hay, and cash, while the sun shines. Last year, a record 68.1 million visitors came here, a 4.7% jump over 2014. Andalusia attracted 26 million, 8.4% more.

While calculating the total number of visitors in Marbella is nigh on impossible (statistics are by province, not municipality), hotel occupancy is reaching new records (90% this September, compared to 85% last year) and the town’s high-end hotels – it has seven five-star establishments, with more on the way – are registering all-time-high demand.

And after trying, and failing, earlier this year to buy the iconic Marbella Club, this October, China’s Wanda Group was revealed as one of three companies in the running to win the €400 million concession to develop a new marina at La Bajadilla, which would make it the biggest project of its kind in the entire Mediterranean.