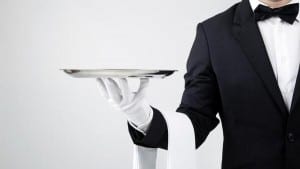 A DRAUGHT of British butlers have been flown in to a Spanish hotel to run the country’s first 24-hour butler service.

Working at the Abadia Retuerta LeDomaine in Valladolid, the butlers will be tending to guests’ every need around the clock at the converted 12th-century Romanesque abbey.

Located in a 500 acre vineyard, the butlers have been hand-picked from Her Majesty’s royal staff.

With 30 hotel rooms, the abbey’s former stables have been converted into an underground spa with sauna, steam room and hydrotherapy pool.

The celebrity guest list is a closely guarded secret, but if you can afford the €450 a night fee then don’t be starstruck if you bump into A-listers from all over the world.