AN expat has been left stumped over a €525 bill for cremating her husband’s amputated leg.

Dianne Jones, 73, from Middlesex, claims she was given no warning of the incineration of the limb – nor of its cost – from Xanit Hospital, in Benalmadena.

It came after husband Francis, 76, was forced to have his leg amputated above the knee after years of suffering from vascular disease.

However, the shock of losing a limb last month was made considerably harder when she was told she had to pay the ‘unexpected’ bill.

Worse than that, it came just days after the operation and while her husband was still recovering at the hospital.

“I came in to be met by a man from a local funeral company, who asked if I had insurance to ‘cover my husband’s cremation’,” she recalled.

“It was horrific. I obviously immediately thought he had died and burst into tears. I nearly fainted.”

It turned out however, that her husband of 56 years was actually fine and the ‘cremation’ was merely of his leg.

“I was told that by law – even if it is your little finger – you have to pay, so I signed on the dotted line,” said pensioner Dianne, who previously ran a cleaning company in the UK.

She has now made an official complaint to the hospital’s welfare department, insisting it is entirely unfair to have to pay it. 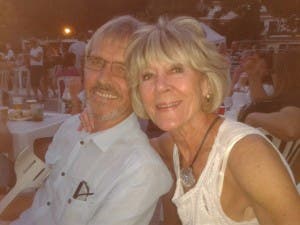 She is already paying the hospital €12,245 for the operation and recovery spell.

While she confirmed that the hospital had apologised for not warning of the impending cremation cost, she believes this is ‘not acceptable’.

“The hospital was very understanding but it was an unsettling experience as I had no prior warning,” added Dianne, who has lived in Spain with her husband since 2006.

Cremation of amputated body parts is mandatory in Spain unless you have a pre-bought cemetery niche or have an agreement to donate it for medical research.

A spokesman from the funeral company blamed it on the hospital for not warning her.
Xanit hospital was not available for comment.