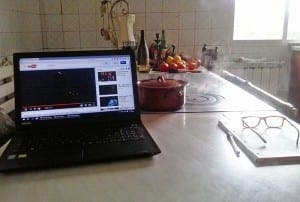 What with the base station undergoing mandatory resetting, difficulties with integration and multiple port scanning…”Well, beam me up Scotty!… I’m surprised you haven’t frazzled your USB mate! Probably forgot to set the clock…

WHAT is going ON!!… are we just bored or something? Haven’t we got enough to do? I mean let’s face it, the eco-political world is close to going down the khazi and we’re busy trying to make it as hard as possible to brew a cup of tea. What would the Tetley tea-men say…?

Why do we have this lemming-like thirst for ever more RAM-based ridicule! From techy kettles to cars which are simply awash with the WAP and the web and they all come with factory standard faults, which are no longer ‘faults’ of course, just glitches that need an update or a software ‘fix’. Back in the day, if something needed fixing.. it was broken! They’re selling us broken goods! And of course you’ve never got enough memory and “Why is it going so slowly today?!” We’re losing the plot! The planet’s going off its axis… can you hear that rumbling?. That’s the Earth’s axle bearings overheating and the one at the north end is melting the bloody ice cap… Aaaaagh!

In contrast, I’m here in the silent centre of celtic Spain, a home in a hamlet. If that dog over there could be bothered to get up, it might bark. Were it not for modern communications, the world, from here, really would seem at perfect peace. In fact ‘the quiet’ here is truly silent, it almost demands your attention. It wouldn’t be the first time I’ve found myself wandering along a country lane and felt compelled to stop, thinking… “What is that I hear?” and of course it is actually, nothing. Sitting here at the end of the marble topped island unit with aga built in, just about the only sound I can detect, is the mild commotion of liquid in a large pot… boiling water. Think I’ll have a cup of tea.

ROOFTOP OFFICE: Mayor of Castellon village forced to work on the sloping roof of his barn to connect to the internet