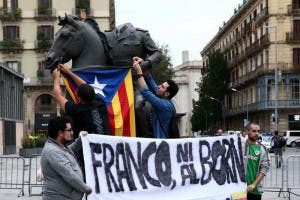 A POLARISING art exhibition featuring a decapitated Franco on a horse has been met with protests and egging.

But Franco’s headless equestrian effigy and another paying to the victory of his troops in the Spanish Civil War were pelted with eggs within minutes of going on display.

Catalan separatists shouted ‘no fascists on our streets’ while a Franco victims’ group held a silent protest.

Deputy Mayor Gerardo Pisarello said the aim of the works was to ‘denounce the crimes of Francoism and impunity, even in democracy.’

But Catalan nationalists said the exhibition trivialises the crimes of the late Spanish dictator.

The exhibition will remain until January.