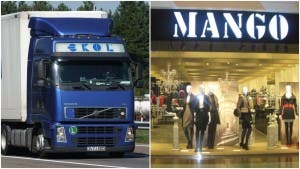 TEN Kurdish migrants have been found sealed in a container belonging to fashion retailer Mango in Spain.

Staff were shocked to discover four children, five men and a woman bundled inside the container when they opened it at the Mango logistics centre in Llica d’Amunt in Barcelona.

One of the group was vomiting and all ten – who were trying to reach the UK – were sent to hospital as a precaution, but they were described as being in “generally good health”.

The Catalan government’s head of equality and immigration, Oriol Amorós, said: “We will help them try to get refugee status but in any case we will accept them in Catalonia as it is our understanding that they are fleeing from a conflict zone.

“They were a bit disoriented when they got off the lorry as they thought they were in the United Kingdom.

“It seems that they had paid someone a sum of money and expected to be taken to Britain.”

Mango has said it will pay for the 10 migrants’ upkeep while their status is being ascertained.

The container was packed in Istanbul and then taken to the port of Izmir before crossing the Mediterranean on board a ferry to France, a 48-hour voyage.

The lorry driver, from Turkey, said he did not suspect anything unusual but is being questioned by police in France, where he picked up the vehicle.

Catalonia has previously expressed dissatisfaction over how many asylum seekers Spain has taken in given that it promised to take 17,000 last autumn.

At the end of August only 474 had arrived.