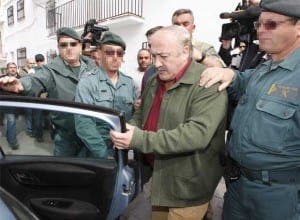 A BENT ex-mayor who allegedly falsely sold land is in the dock.

José Manuel Martín Alba, former PSOE party Alcaucín chief has been accused of knowing and giving consent to the building of illegal homes in Axarquia by prosecutors at Malaga’s Ciudad de Justicia.

Martín and his two daughters are three of 48 people who have been charged with crimes including embezzlement, falsehood, bribery, money laundering and falsifying official documents as part of the Arcos Case.

Back in 2009 police found sales documents and €130,000 stashed under the bed of Martín, who is known as the flamenco mayor after attempting a new career as a singer.

If found guilty, he may face four years behind bars.

According to La Vanguardia newspaper, prosecutors said homes were built on rural land not allowed to be developed “with the knowledge and consent of the mayor.”

His two daughters are already serving sentences of at least six months after coming to out of court agreements.