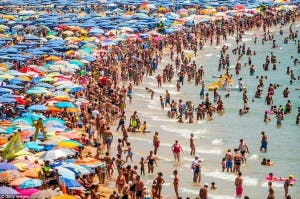 BRITISH tourist spending has increased in Spain despite Brexit fears.

UK visitors spent 15% more in the country in the three months after the June vote than in the same period in 2015.

They were responsible for driving €1.833m into the economy, which accounts for 22% spent in Spain by people from abroad.

The bumper effect was most noticeable in the most popular destinations for UK residents -Valencia, the Canaries and Andalucia.