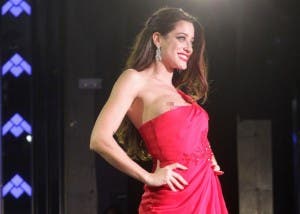 A BEAUTY queen suffered an embarrassing wardrobe malfunction while bidding to become a Miss Spain.

Celina Dominguez, from the Canary Islands, had no idea her nipple had become exposed during a catwalk.

After smiling wide in front of the judges, her fellow contestants informed Celina, 27, of the unfortunate ‘nip slip’ and she quickly pulled up her dress and laughed the awkward moment off.

While not chosen to represent Spain at Miss Universe, Dominguez was awarded the Miss Congeniality prize, which is chosen via a popular vote among the contestants.

Three Malaga women were among the 20 candidates, although the winner was from Noelia Freire, from Ciudad Real.