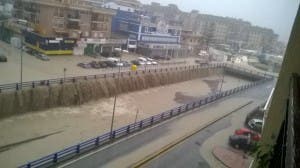 DEVASTATING floods have caused at least €50 million damage to the Costa del Sol, according to latest figures.

The huge preliminary figure only covers coastal towns such as Marbella, Estepona, Manilva and Casares, with the final Malaga province total expected to sky rocket.

Council workers made the estimate after making their first visits to the areas wrecked by the raging waters, which claimed two lives and left hundreds homeless.

But they have not yet revealed the estimate for the worst hit areas, such as Cartama and Coin.

€27 million alone is needed to make repairs in Estepona, where a 26-year-old prostitute tragically drowned due to being trapped in a basement.

It will take €6 million to repair Marbella’s Paseo Maritimo, with  another €6.7 million to be spent in Manilva and €500,000 in Casares.

A further €4 million of damage was caused to Malaga’s city streets.

Work has started there to improve the drainage system, following criticism over its quality by some residents.