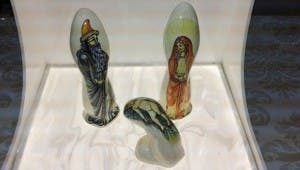 The unique recreation of the iconic biblical scene led to angry outbursts after several people said they were offended.

Shop owner Hector Valdivielso said: “A man with his wife ordered me to remove the offending scene and said that if I didn’t he would remove it himself.”

Valdivielso received so many insults and calls that he had to call the police.

The shop sign was vandalised with the word ‘pecadores’ – sinners – before a group called the Children of the Virgin Mary launched a boycott on the store.

Days later a dozen-strong crowd gathered outside to harass customers.

“It was affecting my business,” said Valdivielso. “Who wants to come to a store like this to hear a sermon?”.

The owner removed the scene from the window and replaced it with a poster asking passersby to vote on whether or not he should replace it, with an overwhelming 78.5% saying he should.

“People asked me not to give in to blackmail,” Valdivielso said. “So it’s going back in the window”.

Bank-robbing gang steal €1.3 million from 33 branches in Spain and even replace front-door locks