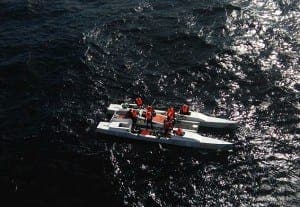 BRITAIN’S ‘Captain Calamity’ has been at it again.

Captain Roy Finlay and his 10-man crew ended up stranded in Spain after being rescued just 48-hours into an Atlantic crossing attempt.

Dubbed ‘Captain Calamity’ following three previous failed crossings, Finlay’s luck got even worse when he touched down on dry land in Gran Canaria only to realise that he had left the entire crew’s passport on board the vessel.

Attempting to break the world record for rowing across the Atlantic, the 10-man crew on board.

Orca II had to be rescued near the Canary Islands after Captain Roy Finlay fell ill.

Hoisted to safety by a Maritime Rescue helicopter, it was only when the team entered the hospital that they realised their passports had been abandoned with the ship.

“Sadly the expedition is over,” the crew announced on Facebook. “The next challenge is working out how to get home without passports!”

They had been bidding to smash several world records aiming to get to Barbados some 3,000 miles away in less than 30 days.

Finlay, 54, from Renfrewshire remains in hospital where he is being treated for a kidney infection.

He was first dubbed Captain Calamity in 1998 after his crew accused him of being drunk during a failed Atlantic crossing.