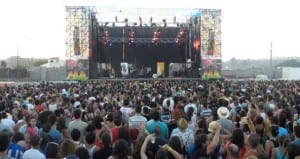 NINETIES ravers The Prodigy will set the stage alight at a major Costa del Sol festival.

The party-mad Brits are the latest big name to be added to Weekend Beach Festival Torre del Mar, which will return from July 5 to 8 in 2017.

It is one of only a handful of new year dates so far announced for the veteran three piece, who released their sixth album The Day is My Enemy in 2015.

A total of 46 acts are now on the bill for the Axarquía region event, which last year brought together 90 top class national and international acts such as Wiz Khalifa and DJ Skrillex.

Other acts on next year’s line up so far include electronic producers Seth Troxler and Camo and Krooked and ska band Los Fabulosos Cadillacs.