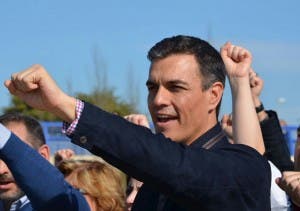 THE ex-leader of the Socialists has launched a fresh leadership bid.

Pedro Sanchez announced his candidacy to a huge 3,000 strong rally in Sevilla, the first stop on a countrywide tour to meet his supporters.

He is the second politician to announce his intention to stand in this summer’s PSOE leadership contest, following the decision of Patxi Lopez, the former Party of Euskadi president.

Flanked by various PSOE party militants at the gathering, the charismatic leftist committed to ‘re-democratising’ the party and making it a powerful opposition to Mariano Rajoy’s right wing government.

Sanchez, who resigned from the top job last October, explained he left over his irreconcilable opposition to giving Rajoy a mandate to lead the country, an issue that split the party.

“From the bottom of the heart of Andalucian socialism, I want to tell you that I will be your candidate”, said Sanchez, 44, told the crowd among their chants of support. 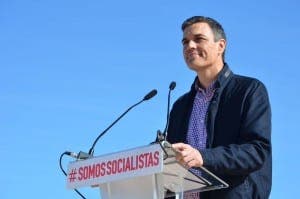 “I have more experience and desire than ever,” he added.

“It will be an honor to lead your collective project.”

Sanchez has not yet laid out a detailed policy plan but in his speech said that he wanted the party to become a strong ‘autonomous, independent, federal and secular’ force.

He used his platform to request the help of ‘militants’ to help him get through the party’s primary elections, which will be held in May.

Successful candidates will then go head to head in a final vote, with the winner to be announced at the party’s congress in June.