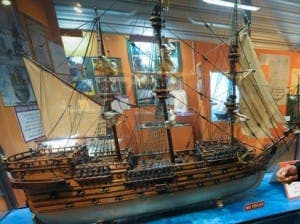 A BRITISH warship sunk by the Spanish off the coast of Uruguay in 1763 is set to be raised by an Argentine treasure-hunter.

The Lord Clive was blasted by cannon fire while attempting to reclaim the city of Colonia del Sacramento, a former British colony seized by the Spanish.

The wreck was found in 2004 by Argentinian Ruben Collado, who is set to recover it next month.

Collado is hoping to discover £1 billion in gold coins, as the six-story ship was equipped with the finances to wage war for four years.

He has stressed that raising the ship will be an important event for Latin American and Spanish history.

He said: “if that ship had not failed in its attempt to retake the city of Colonia del Sacramento, today we could be speaking English throughout Latin America.”

A team of 80 divers, technicians and support staff will work on raising the wreck, an operation expected to cost about £4 million.

Kicking things off! The surprising story of how one Brit brought football to Spain