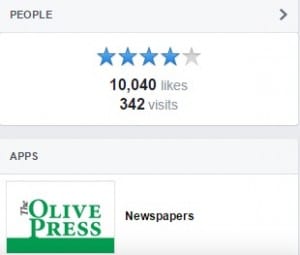 THE Olive Press Facebook page has broken through the 10,000 ‘Likes’ barrier!

With a decade of breaking news coverage under our belts, we are proud to be the only English-speaking investigative newspaper in Andalucia.

Over the years we have uncovered fraudsters, caught wanted criminals, exposed corruption and fought for the environment and expats’ rights with our campaigns.

We would like to take this opportunity to thank the expat community and our advertisers for supporting our work, which nowadays is more important than ever.

Here we take a look back at some of our best scoops in the last year, which were picked up by media outlets in Spain and internationally, from the UK to the Netherlands.

You read it here first! 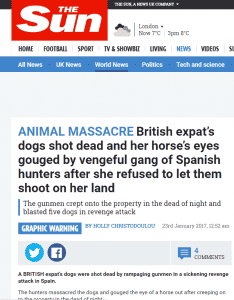 Our most recent exclusive on the harrowing massacre of expat Illona Mitchell’s rescue dogs grabbed readers’ attention coast-wide and was soon featured in every local publication.


Just two days later the story was picked up by the UK press and made the news pages of the Daily Mail, The Sun and The Times***(dont know for sure yet).

After being named among the Top Ten Most Wanted criminals, we 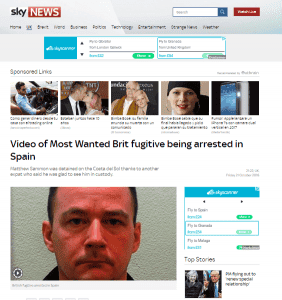 tracked down British paedophile Matthew Sammon to Fuengirola. An Olive Press stakeout ensued and weimmediately called the cops when we had confirmation that it was Sammon hiding in his caravan. The piece was picked up by Sky News, The Sun and the Daily Mail in the UK, as well publications across the coast. 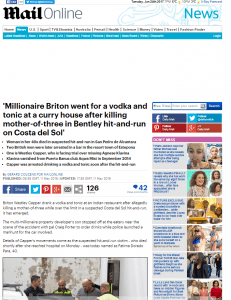 When we heard a black Bentley had ran over and killed a Bolivian mother in Marbella last summer, we hit the streets to uncover the truth. We revealed how notorious Brit Westley
Capper and his buddy calmly sipped beers and gorged on chicken tikka just minutes after leaving the expat waitress dead in the road.

Expat Dianne Jones was charged €525 to have her husband’s amputated leg cremated. The surprise bill came after hubby Francis, 76, was forced to have his left leg amputated above the knee after suffering years of vascular disease. The story made weekend papers in the UK, including The Sun.


Meanwhile our presence in Gibraltar is only growing stronger. Since launching a little over a year ago, the Gibraltar Olive Press website has grown from just a few hundred hits per day to more than 3,000. Just like our Spain edition, we haven’t been afraid to ask the tough questions and print the truth, even if that means ruffling some feathers.