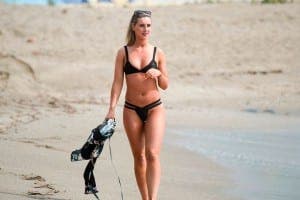 PERU Two drugs mule Michaella McCollum has returned to Spain for the first time since being released from prison.

The 23 year old was spotted strolling along Marbella’s shores in a black bikini and shades.

It comes four years after the Irishwoman was caught in Peru while trying to smuggle more than €2 million worth of cocaine from Mallorca.

The model spent three years inside a mosquito-infested cell with seven other women for the offence, including her accomplice and other half to the ‘Peru Two’ Melissa Reid.

McCollum wrote on Facebook: “Now that I have the chance, I just want to thank everyone who has supported myself and family through these past few years. Please know I truly appreciate each one who cared and had my back.”