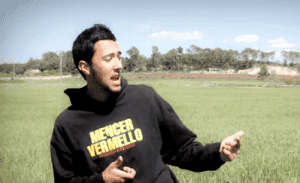 A SPANISH rapper has been sent to prison for his song lyrics.

Mallorcan Josep Miquel Arenas, also known as Valtonyc, has been sentenced to three and a half years for threats, glorifying terrorism and insulting the crown.

The rapper published videos on YouTube during 2012 and 2013 in which lyrics supported and justified terrorist organisations such as ETA, encouraging the group to recommence attacks.

Other lyrics also reference King Juan Carlos and the president of the Balearics Jorge Campos.

“If I had known I would have killed someone, it would have been cheaper,” Arenas said in a tweet.

Alex Trelinski - 24 May, 2022 @ 16:45
A British man has been arrested at Alicante-Elche airport after attacking three Policia Nacional officers at passport control. The tourist flew in last weekend and...