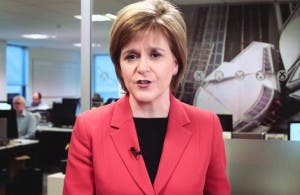 THE SNP has struggled to find friends in Spain during a trip to garner support for Scotland gaining exclusive access to the EU single market.

Stephen Gethins also gave reassurances that the SNP will remain neutral on the Catalan independence issue.

The party was attempting to assuage Spanish concerns that granting an independent Scotland access to the EU will only encourage the Catalan secessionist movement.

The move has shown the SNP is prepared to turn its back on its Catalan allies if it secures Spanish support in Brussels.

But despite his efforts to be heard, Gethins was only met by centre-left PSOE and far-left Podemos MPs.

Not one MP from Mariano Rajoy’s Partido Popular met with the spokesman, while only three journalists showed up to press conference after the meetings, according to Politico.

It is a blow for Nicola Sturgeon’s independence hopes as access to the market and EU membership will be fundamental in gaining popular support to secede from the UK.

As one of the biggest EU players, Spanish support would be vital.