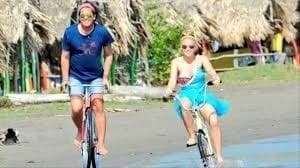 The Colombian pop star and Carlos Vives, her co-singer on the track, are being sued for partially copying the work of 20-year-old Madrid-based Cuban singer, Livan Rafael Castellanos, known professionally as Livam.

Music publisher MDRB highlights similarities between the Cuban’s song, Yo Te Quiero Mucho (I Love You So Much) and La Bicicleta, especially the lyrics in the chorus which in Livam’s rendition include the words: ‘yo te quiero, yo te quiero tanto’. The Shakira and Vives version features the line: ‘que te sueno y te quiero tanto’.

“I have nothing against Shakira, Vives or anybody else,” said Livam. “It’s the law that needs to decide whether changing a song’s key is enough to make it different.”

Cristina Hodgson - 29 Jun, 2022 @ 08:45
VISITORS to the spectacular cave complex in Nerja will soon be able to enjoy rock art via a virtual reality experience. In a drive to...