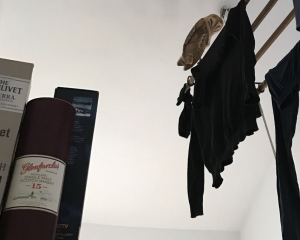 A BRITISH expat has nursed an owl back to health with ibuprofen – and the hint of a dram of whiskey.

Vejer hotelier James Stuart, 54, found the bird on the side of the road and used a syringe to administer some ibuprofen.

He believed the tawny owl had been hit by a car and was expecting his feathered friend to bow out gracefully in the night.

However the next day he came back home to find it had flown up to rafters of his living room and was eyeing up a bottle of whiskey.

“It was a good 20-year malt, so he must have got his mojo back,” said the owner of Califa Hotel.

A few days later he flew away, apparently fit and well.

“It’s really quite extraordinary,” he continued. “I’ve taken care of small injured birds with my two daughters before, but they never made a recovery.”