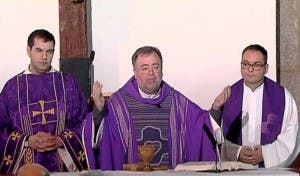 AUDIENCE figures for Spain’s televised Sunday Mass soared after Podemos called for it to be scrapped.

The far-left party had proposed a bill that would end the broadcast of the Roman Catholic Mass on La2 television in a bid to make Spain more ‘multicultural’.

The bid came despite the broadcaster also showing secular, Jewish and Muslim shows.

But after the conservative Partido Popular campaigned against the initiative, the broadcast raked in 1.2 million viewers, its largest audience since 2004.

Podemos argued that while it does not oppose religious programming, religious rituals should not be shown on state-funded television in an era of increasing multiculturalism and secularism.

Party leader Pablo Iglesias has stood by his action, posting a video on Twitter showing Antonio Reig, the arch-conservative bishop near Madrid, declaring that gays who prostitute themselves or go to gay nightclubs ‘will go to hell’.

Iglesias said: “In a mass, sending someone to hell for being gay? On public television, which we all pay for. No thanks.”

Meanwhile, an online petition to protect the programme has garnered almost 100,000 signatures.

Church attendance is down in Spain as the most recent survey saw 59.3% say they ‘almost never’ go to Mass.