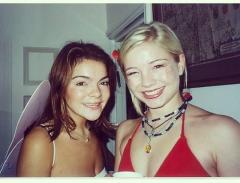 WHEN I was fourteen years old, I was packed off to boarding school.

Kurt Cobain had just died, the grunge movement was in full swing and I’d traded ballet classes and books for rock music and ripped jeans.

My mother, horrified by my new look (I’d cut and dyed my long, dark locks in an attempt to channel Courtney Love – resulting in a hideous ginger frizz!) had concluded that a school for ‘lovely young ladies’ would be my only salvation.

As the car pulled up outside the imposing Victorian mansion on the first day of term, I watched with dread as immaculately groomed princesses skipped up the steps, pushy parents in tow, laden with suitcases, trinkets and teddies. I was in hell.

An afternoon of frenzied fuss and commotion ensued, until finally the parents departed and I watched from my dormitory window as mine drove out of view.

Fearing the other girls might witness my tear-streaked face, I clambered into my trunk where I could sob – unobserved.

“Knock, knock, knock!” Anybody in there?!” came a squeaky little voice. “Anybody in there?!” The lid was lifted back and a beaming smile grinned down at me. A pretty blonde girl stood smiling mischievously, “I’m new too,” she said. “Want to go exploring?” She reached out her hand, and we were off.

That was Samm. She wore long flowing skirts and rainbow-coloured clothing, and her bracelets and beads jingle-jangled everywhere we went. 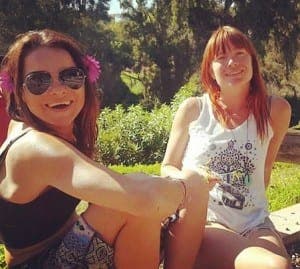 For the next four years we sailed the tempestuous seas of adolescence together and grew from awkward, quirky, young school girls into young women, although perhaps not quite the ‘lovely young ladies’ my mother had envisioned.

I danced, she sang, we razzled and dazzled until, exhausted and broke, we each set off on separate paths to discover the world.

From a wooden hut in Madagascar, to an island in Cambodia, we exchanged endless emails of stories and adventures over the years, as we crossed continents in passionate pursuit of our dreams until I finally planted roots here in southern Spain and conceded that perhaps our mutual escapades were over.

At the end of last year, I received an email update from Samm: “I’m moving to Spain!” she wrote. “To Coín! Is it near you?”

“Is it near me?!” I could scarcely believe it; my long-lost friend was going to be living a mere thirty minutes from my front door.

Samm was finally realising her dream to create a retreat for writers, poets, painters and artists of all kinds.

A place to recharge and unwind, offering workshops, classes, yoga in nature, a sanctuary of relaxation and inspiration, and a magical place for creativity to flourish and grow.

She had found a delightful spot just outside of the village of Coín, on the banks of the Río Bajo.

Last weekend saw Andalucían spring erupt in all its splendour, so we ascended the scenic, winding road from Marbella to Coín for some rejuvenation in nature.

Olive and avocado groves lined the roads, orange and lemon trees blossomed and bright yellow clover covered the banks of the river – Riverheart Retreat was glorious in the March sunshine.

As we lay in the grass in the late afternoon sun – the golden light dancing off the ripples in the river, as the children climbed trees and swung over the banks on ropes, a game of boules in progress nearby, listening to the cacophony of birdsong, children’s laughter and a guitar strumming lazily, I knew that we had both finally found what we’d been looking for.

Like the rest of us, Samm had been seduced by the magic of Andalucía – the laid-back lifestyle, long summer siestas, the sound of cicadas, stunning scenery and gorgeous climate – and as with so many of us residing here on the coast, she came had come here to make a life, not just to make a living.

We gazed up at the sky naming cloud-creatures, as we used to do at school.