The Olive Press spoke to Spaniards living in the UK and to Brits living in Spain – two groups who share fears over what Brexit may mean for their futures. 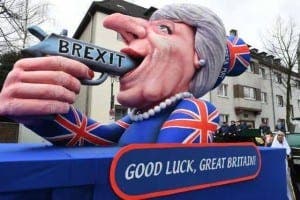 GLYN and Kath Emerton have lived on the Costa del Sol for 10 years. Since relocating from Luton, 67-year-old Kath has used Spain’s health system for an operation on her leg.

But with no deal on health care currently secured between the British and Spanish governments post-Brexit, the couple are concerned for the future.

“We are living in limbo,” said Glyn, 64. “Will we have our health care? Everybody we talk to is worried about that. Lots of the people we talk to retired here, and if they have to pay for health care it’s a problem.

“We do not want to go back to England. We are British but we came here under a set of rules.”

Although the British consulate have been ‘great’, says Glyn, even they have told him ‘we do not know the answers’.

For thousands of British people in Spain, the lack of clear answers is adding to stress levels.

Officially, some 300,000 Brits live in in Spain, but with many not registered on the padron the real figure is thought to be much higher. According to the Office for National Statistics, around a third (101,045) are 65 or over.

Anne Hernandez, co-founder of campaign group Brexpats in Spain is advising the British community to ‘get themselves 100% legal’ before the divorce treaty is finalised.

“People should make sure their residencia has written on it con caracter permanente,” she said.

“It must be a permanent one. They need to get on the padron in their local town hall. That registers you as a resident citizen.

“Get your driving licence in order if you need to. If you’ve been here two years you really need to get a Spanish one anyway.”

She added: “For some people it is now hitting home. But many are saying, ‘Well, nothing is going to happen until 2019’. Well, for the Spanish in the UK, it is already happening to them.”

With some 11,000 Brits registered in Mijas and around 65,00 in Malaga, ‘an awful lot of lives are going to change,’ warned Hernandez.

The tones from the Spanish government are at least encouraging.

Last week, Spanish EU secretary Jorge Toledo, Madrid’s chief Brexit negotiator, told The Times: “We are broadly in favour of retaining a reciprocal agreement on questions like healthcare and freedom of movement.”

Currently, healthcare can be accessed for free by UK pensioners in Spain, with the cost reimbursed by Britain. But the concerns over health could have been resolved already, says Hernandez.

“There is a reciprocal, bilateral arrangement that Britain pays Spain x amount per year per pensioner for health care. That is not reliant on the EU, it has nothing to do with the EU. They can guarantee that. But they’re holding out to use us as bargaining chips.”

If no deal is struck to secure those rights, the cost of insurance would be prohibitive for some.

Pensioners are also being hit by the post-Brexit drop in sterling. The pound is now trading at €1.15 against the euro, down from €1.30 on June 22.

And the triple-lock whereby pensions rise by either inflation, earnings growth or 2.5 per cent could be wiped after UK chancellor Philip Hammond recently confirmed a review of state spending on pensioners.

With many British pensioners in countries outside the EU having their pensions frozen, the UK may now have to strike individual post-Brexit deals with countries like Spain to ensure pensions continue to rise in value.

One route increasingly being taken up is to apply for Spanish citizenship, which currently requires British people to renounce their UK citizenship.

Official Spanish figures show a spike in Spain’s British expat community taking the citizenship test. While 70 took the test in the six months prior to June’s referendum, 423 have done so since.

A challenge even for Spaniards, questions include who is responsible for calling a general election in Spain, what is the country’s highest mountain in Spain and why was Juan Ramón Jiménez awarded the Nobel Prize in 1956.

The level of Spanish needed to pass (DELE A2), requires candidates to relay ‘basic information about themselves, and their families, shopping, places of interest, work.’

Richard Appleyard has lived and worked with his wife, Jean, in Spain for 30 years.

Fluent in Spanish and fully integrated, he says he is fully considering applying for Spanish citizenship this year if ‘things look like they are going bad’.

“Obviously no one wants to give up their nationality, but we do not want to go back to Britain as we feel more at home here,” he said from his home in Madrid.

“The Spanish government are being very understanding, but it feels like we are being moved by forces beyond our control.”

But whereas Spaniards living in the UK can apply for dual nationality after five years, British expats in Spain have to wait 10 years and must renounce their British citizenship.

Guardian journalist Giles Tremlett is leading the campaign to change this, but agrees with Hernandez that some key fears could have been resolved by now.

He said: “There is nothing bilateral or reciprocal about pensions. The UK government can deal with that any time and it hasn’t. Which is pretty daft really.

“What I don’t think the Spanish know is what reciprocal rights should be included.

“But the key question for the Spanish government is what rights do they think Spaniards in the UK should lose.” 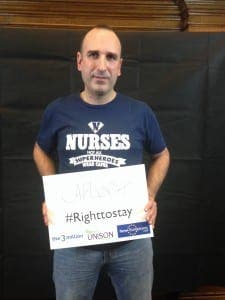 JOAN Pons Laplana has lived in Britain for 17 years. The 41-year-old Barcelona native works as an NHS nurse in Norwich. But despite having a British wife and three children born in the UK, Brexit has left him feeling ‘like a second-class citizen’.

“I am conscious I am not as welcome here now,” he said. “In the last eight months, I have been verbally attacked on social media for my nationality and told to go home.

“A nurse friend of mine in Glasgow was told by a patient recently, ‘I do not want you to care for me. I want someone British’. That  did not happen before.”

He added: “I am here because there is a chronic shortage of nurses. I love this country. But we are being treated like garbage by Theresa May.”

Like Brits in Spain, the UK’s 3.2 million EU citizens are still no clearer about their rights once Britain leaves the single bloc. Many like Joan are long-term British taxpayers but all were denied a referendum vote, as were Britons living in Spain for over 15 years. Given how close the final result was – 17,410,742  Leave to 16,141,24  Remain – these lost votes could well have swung it the other way.

Parliament’s refusal to maintain the rights of EU citizens when passing March’s Brexit deal has meant Spaniards living in the UK still have no safeguard.

Many are younger workers who fled Spain’s savage economic recession which hit with the 2009 property crash. Spain’s Institute of National Statistics (INE) reports the number of Spaniards living in Britain increased from 57,770 in 2009 to 102,498 in 2016.

Many, like 26-year-old Guildhall School of Music student Maria Jose Sola Avila, are now concerned about their right to remain in their adopted homeland.

“I am always scared,” said the Almeria native.

“You need to be here five years to get permanent residency, and I probably will have been here three by the end of the Brexit negotiations. “The government is treating us like criminals and using us as a gun to pressure the EU.”

The sense that Britain is no longer such a welcoming place has led many of her Spanish friends to consider moving to another country.

Since Brexit, there has been a 90% drop in the number of EU nurses registering to work in Britain, according to the Nursing and Midwifery Council (NMC). With the 20,000 nursing shortage highlighted by the Royal College of Nursing, the figures are worrying.

For those already living in the UK, the process of applying to remain is also far from straightforward.

EU citizens who have lived in the UK for five years or more must fill in an 85-page document to apply for permanent residency, a prerequisite for gaining British citizenship.

The labyrinthine document, described by Laplana as a ‘nightmare’, requires financial records, letters from employers and details of each time the person has left the UK since first entering the country.

“You need a solicitor to be able complete it properly or the chances of rejection are incredibly high,” said Laplana, a member of The 3 Million protest group who spoke at last week’s huge Unite for Europe rally in London.

Madrid-based journalist and campaigner Giles Tremlett has labelled the process ‘a disgrace’.

“I was at the House of Commons Brexit Committee when the person who was explaining it brought out this shrink-wrapped pile of paper that weighed five kilos, dropped it on the table and said, ‘That’s half of what I’ve got to show’.

“It seems to be deliberately obstructionist.”

Another Spaniard living in London, Susana Mañogil Campoy, is currently navigating the process of applying for her permanent residency card.

“I have to provide proof of every single personal detail and nothing will assure me that I will be successful, as criteria is changing every month,” said the nursery worker, originally from Murcia.

“Rumours within the Spanish community here are that a year ago applications like this were granted within weeks and now are rejected for nonsenses.”

Recent government figures show around 28% of applications from EU workers have been rejected since the Brexit vote, although a Home Office spokesperson maintained that ‘refusal rates have not changed over the last year’.

Having lived in the UK for 24 years, the Madrileno is also applying for permanent residency.

“They want my phone bills from as far back as 2006, benefit records from 1998, all my payslips, letters from previous employers, although one of mine has since died,” she said.“People are spending fortunes on lawyers.”

It is unclear how many of those arrived after June 23. But with the divorce clock running  it would be astonishing if those numbers increased by anywhere near that amount come January next year.