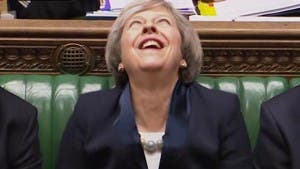 THERESA May has laughed off the idea of going to war with Spain.

It comes after Lord Michael Howard said the UK prime minister would be prepared to show the ‘same resolve’ as Margaret Thatcher did over the Falklands.

May has now said her policy towards Spain will be ‘jaw-jaw’ and not ‘war-war’.

“What we are doing with all European countries in the European Union is sitting down and talking to them. We are going to talk to them about the best possible deal for the United Kingdom and for those countries, Spain included,” she said. “It’s definitely jaw-jaw.”

At the Downing Street lobby briefing this morning, the PM’s spokesman ruled out sending a Falklands-style taskforce to protect Gibraltar.