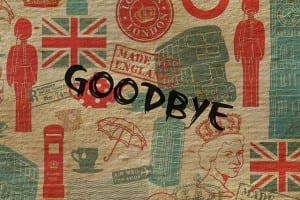 DIVORCE has been a hot topic of conversation in the last few days.

No, it’s OK, my wife and I are still ‘two halves of the orange’ as the Spanish say.

The big ‘divorce’ that’s occupied our minds most this week is, of course, Brexit, after the UK officially began the complex process of negotiating its departure from the EU.

We’ve been through the ‘phoney war’ period of sabre rattling, but now there has been the irrevocable declaration that we are leaving.

I say irrevocable as, though the decision could be rescinded before the two years negotiating period is past, the changes in the EU and the UK would have to be so extreme as to be impossible for the parties to contemplate.

It’s been described as a divorce and that’s exactly what it’s like.

The UK and EU could be the parents ‘agreeing’ that they cannot live together, but what about the children?

The effects on them could be devastating and I’m thinking of Ireland, both North and the Republic, Gibraltar and of course ourselves as expats.

The social and religious background to the two Irelands is such that any solution other than the existing, delicate balance of power sharing, is almost certain to bring protest, strife and probably violence.

Whichever way the balance tilts or even if it just about keeps the same, one side or the other will be offended and take their protests to the two capitals of London and Dublin.

As the taxes and paperwork at least are bound to be different, Donald Trump’s Mexican wall will be as nothing compared to the delicacy that will be required to mark the border that runs through those green Irish hills.

As soon as the result was announced, Spain declared that it would now see its flag on the Rock of Gibraltar.

Today, it’s been shown in a draft EU document that Spain will make an agreement by the EU, on the whole of the UK position, subject to it dealing with Gibraltar on terms acceptable to them. Given that the UK cannot abandon 99% of the people on the Rock who voted to remain in the UK (and 98% who voted to stay in the EU), it could be that there will never be an EU-UK Agreement.

What I’m asking in this column is what this actually means for us UK passport holders who live, work and play on the costas, inland and the islands of Spain.

Well, frankly, nobody knows at present and that includes the politicians on both sides.

There have been lots of fine words about protecting our interests, but nothing definite such as the ideal, ‘carry on as before’.

This uncertainty is the major problem. The day after the vote, we had three pre-acquisition building survey instructions cancelled, so it looked bad.

However, since then we’ve been busy and perhaps even busier than before.

So, it looks like people who have thought of Spain are still thinking of it and decided to go ahead despite the potential problems.

Agents declare that they are busy, with perhaps more of a balance towards Belgian and Nordic buyers, but still with a constant flow of interest from the UK.

Perhaps the thought is that the UK is not going to be such a good place to live for the next few years and that the ‘happiness’ benefits of living in Spain outweigh the possible problems.

We simple souls can only wait to see what is decided in the corridors of power.

Once these decisions are made, then we can make the best of it.

And be thankful that we are not in Ireland or Gibraltar.