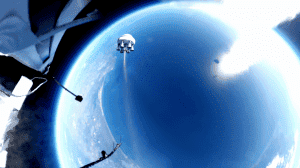 Zero 2 Infinity, which plans to send small satellites into orbit, successfully performed its first rocket test flight from beneath a high-altitude balloon.

Launching from a ship off the coast of Spain, a stratospheric balloon took the company’s ‘Bloostar’ rocket to the edge of space, some 25km in altitude.

Launch teams then gave the order to drop the small rocket from the balloon and ignite its engines.

There were a number of goals for this test, including the validation of the system’s telemetry, the demonstration that the rocket could perform a controlled ignition and was stable, and the test of parachute deployment for a sea recovery, all of which were achieved.

The company hopes to be able to launch micro and nanosatellites less than 220 pounds (100 kilograms) to orbit by using a stratospheric balloon as its first stage.

Zero 2 Infinity says it will allow the company to launch satellites for customers with only a two-week notice and without releasing any polluting emissions into the atmosphere.

The company, formed in 2009, said that it is working toward opening up space for small companies, schools, and universities by lowering the cost of dedicated small satellite launches.