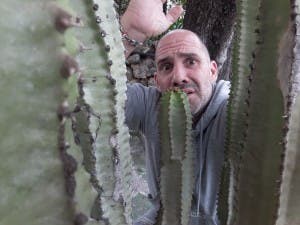 The May Day bank holiday has been and gone – and the rain didn’t dampen the celebrations that mark the opening of the beach clubs – and the summer season is with us once again.

I have always liked May as a month – and as a frizzy-permed, badger-loving guitarist with Queen.

May starts with a public holiday, which is always a wise move in my book. May 1 is International Workers Day, celebrated all over the world – though as a freelance writer and broadcaster for the past 30 years I obviously have a very loose concept of the word ‘work’.

My career, such as it is, has mainly consisted of being somewhere near the right place at roughly the right time, especially if there is the chance of finding something – or even better, someone –  light and bubbly at the bar.

I got a reputation for being the first responder to any event that was going in the 90s and noughties.

When a friend’s organic ice cream company announced that it was giving away free samples, I made a beeline to the location.

Ice cream was being freely distributed from the back of a refrigerated lorry with its doors open, a scenario that caused one of my best mates, who has seen me in action at hundreds of events over the years, to cry out:

“I don’t believe it. You’ve finally turned up to the opening of a fridge door!”

May is, however, also the month when residents take a deep breath before plunging into the madness of summer. And with airlines and hotels reporting even more demand than last year, which was a record breaker, Summer 2017 looks set to go down in Spain’s tourism history.

All the restaurant, bar and club owners I’ve spoken to in the past couple of weeks mention 2017 in the foreboding terms usually reserved for Godzilla movies – “I can feel it coming….it’s going to be huge….it’s going to smash Marbella”.

Luckily I have the option of retreating to the Casita during the summer months to lay low. The Casita is off grid, which means I have a huge deposit tank for water and a generator for power and am able to stock up with enough food to withstand the fake-tanned zombie apocalypse that can be Marbella during summer.

Although life still has its hazards. My house guest (three weeks in and counting) came with her cat, which managed to get stuck up one of my large cacti.

Being the manly type that I am, I attempted to rescue the marooned moggie, made a misstep and went flying headfirst into the prickles.

The cat came down of its own accord minutes later and as I lay pin-cushioned in the shrubbery, I reflected that I might have accidently discovered a new alternative medicine.
Cactus acupuncture anyone?