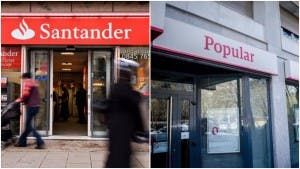 SANTANDER is to buy struggling rival Banco Popular for a nominal one euro after it was determined by European authorities that the bank is on the verge of insolvency.

Santander – Spain’s biggest bank – will ask investors for around €7 billion of fresh capital to cover the cost of boosting Popular.

Popular has come into trouble due to mounting risky property loans worth billions of euros.

The rescue is the first use of an EU regime to deal with failing banks, which was adopted after the 2008 financial crisis.

Instead using taxpayers’ money to save the bank, the method imposes steep losses on shareholders and some creditors.

The move has been described as ‘unexpected’.