PERCHED on a headland below the pretty white village of Benalmadena lies Sunset Beach Club. Surrounded by lovely beaches and with stunning views across the Med, it is no surprise it has become one of the Costa del Sol’s best known hotels.

But while it is already a major landmark receiving thousands of visitors from around the world each month, it has now reached legendary status. For Sunset Beach has just celebrated its 30th birthday making it a true Malaga stalwart.

Celebrating in style with a big anniversary bash, which raised €12,200 for charity, the hotel has never been in ruder health. Aside from the hundred-plus weddings it hosts every year, it has countless returning guests and a capacity rate of an incredible 93% between February and November.

“That’s a rate almost unheard of on the coast,” explains Mark Wardell, who has been managing the hotel for the last 13 years. An incredible range of guests and nationalities come throughout the year, including Canadians in the winter, people from most European countries and plenty from further afield.

“We regularly have returning guests who used to stay with their families as children in the 80s,” continues Wardell, a cultured, softly-spoken Irishman, who is incredibly approachable and hands on with both staff and guests. “And it is great to have them back.”

So what is the key to the hotel’s success? Sunset Beach is a complete resort as opposed to a hotel. The guests needs are entirely taken care of and waited on hand and foot by up to 220 staff at peak times. Its Irish owners – who also own upmarket La Cala Resort in Mijas – have spent over €22m upgrading its facilities since the Millennium. Without a doubt the price/ quality level is one of the best on the coast across all its extensive facilities. 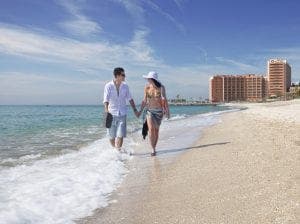 On site, there’s a supermarket, gym, beautician and hairdresser, as well as a variety of restaurants and bars, including the excellent Oasis restaurant, Luna Beach, Panorama bar and the popular Moonlight Bar venue, which has a capacity for 350 and hosts various events throughout the year.

In addition, there is a huge range of activities on offer, including aerobics, cookery and Spanish classes all year round, not to mention billiards, live music and scuba diving. The rooms are all one or two-bedroom apartments with fully-equipped kitchens, free Wi-Fi and satellite TVs with several international channels.

Blas Lopez, who has been at the hotel since its opening in 1987, says the resort has always been ahead of the game in terms of technology. “When I arrived, even the guests were surprised that we had computers at the reception,” he recalls. Lopez, along with several other long-term loyal staff members, has seen the hotel evolve throughout the years – from a quality three-star establishment, to the more luxurious four-star property it is now. 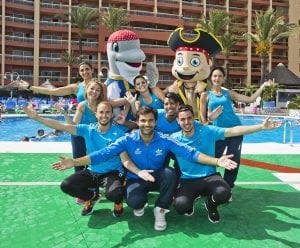 While most visitors hail from the UK and Ireland, the resort has recently been attracting more and more customers from around the world, with up to 100 nationalities staying here throughout the year. This is one of the things Lopez enjoys the most about working there.

“You get all kinds of people here – Canadians, South Africans and Germans – it really depends on the year. So no two days are the same working here. “ That along with the satisfaction he feels by helping his guests with their requests – large or small. It’s staff like this and their commitment to hospitality that, undoubtedly, give the re- sort its gleaming reputation.