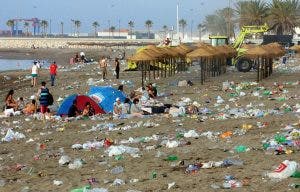 MORE than 28 tonnes of rubbish were left on Malaga beaches following the San Juan celebrations at the weekend.

The amount is almost double that of last year’s 15 tonnes.

La Malagueta beach had the most waste, followed by La Misericordia, El Palo and Guadalmar.

It comes after an awareness campaign, Malaga I love you, was launched in a bid to curb littering ahead of the event.

While littering almost doubled, the amount of bonfires decreased ‘significantly’ as 100 local police officers were on patrol to ensure no unauthorised fires were being lit.