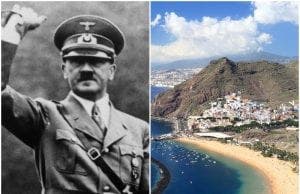 NEWLY declassified documents have revealed war-time Britain’s fears that the Nazis were planning a coup on the Canary Islands.

The newly released documents from the National Archives of the United Kingdom show how the UK thought Hitler might have backed a coup in the Canary Islands with the help of its large German population.

A report from December 11, 1940, called Possible German Action in the Atlantic, explores the possibility that the Canaries might have fallen under the control of the Germans, giving them a strategic stronghold for their operations in the Atlantic.

A coup was a feasable move given the archipelago’s a sizable German community was already present in the.

The report notes how ‘some 2,000 have recently arrived by plane.’

A large number of German ships were also moored at different ports throughout the archipelago.

The conditions on the islands were ripe for an uprising.

As the report notes, the people were suffering from ‘poor economic conditions’ and had a ‘disaffection with the regime’ of dictator Francisco Franco.

The report concludes that had Hitler tried to foment a coup, it would have been backed by the German navy.

The Allies themselves prepared plans the following year to invade the islands by taking the port of Las Palmas, in the event that Spain joined the Axis, which it never did.