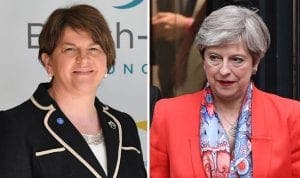 THE Conservative party in the UK has reached an agreement with Northern Ireland’s Democratic Unionists which will see them support Theresa May’s government.

It comes after two weeks of talks in the wake of the shock hung parliament that left May without a working majority.

The DUP, whose far-right leanings have come under heavy criticism, will back the Tories in key votes in the House of Commons, but there will be no formal coalition.

In return for their support, the DUP has claimed the UK government has agreed to improve the treatment of military veterans in Northern Ireland, while playing down reports that it sought more than €2 billion in extra funding for their country.

The so-called ‘confidence and supply’ arrangement will see the DUP’s 10 MPs support May’s key votes, including the Queen’s Speech next week.

Their support will not be guaranteed on other issues.

Both parties have said the pact will give the UK much-needed stability during the Brexit process.