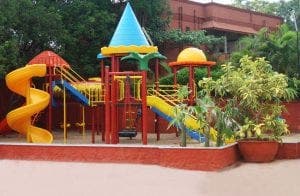 TWO men and a woman have been arrested for allegedly having sex next to a children’s playground.

It came after several calls at around 1pm on Saturday from shocked parents who witnessed the trio engaging in sex acts within clear sight of the kids’ play area.

The incident occured in the Emperatriz Maria de Austria park in the Carabanchel district of Madrid.

The group had moved to some nearby grass to sleep by the time police arrived, when they were arrested.

The National Police confirmed that they had arrested an 18-year-old woman and two men, aged 19 and 29 for exhibitionism.

El Mundo reported the three were all local residents and had been partying all night before finding their way to the park and may have been under the influence of alcohol and drugs.

“They were quite close to us and were going at it without any kind of discretion,” a mother told the paper, “It caught the attention of those nearby.”