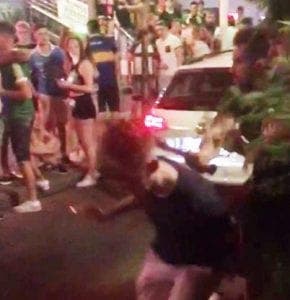 SPANISH police have been accused of going too far after allegedly beating British holidaymakers ‘for singing’.

Video footage has emerged of a policeman running towards clubbers before attacking them with a baton on Saturday night.

The film, shot in a popular tourist resort, clearly shows the officer randomly attacking teenagers as they took part in a group singalong.

Daniel Davis, 34, told the Sun he saw one of the officers ‘whip’ young holidaymakers as they stood in the road.

“One of them had a whip, it was shocking,” he said. 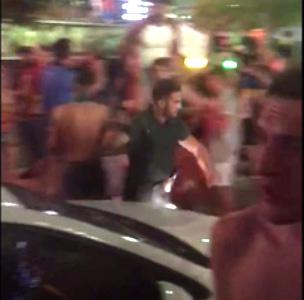 Daniel was exiting a pub in the Santa Ponsa resort, on Mallorca, when he witnessed the attack at around 4am.

“Kids were chanting in the street. All of a sudden a car was trying to get past and that’s when police arrived,” he said.

“They came running in and were hitting everyone, they were so aggressive.”

He says they made him delete some of his footage, but his phone died half way through, meaning some of it was saved.

“There is a massive problem over there. They do not like anybody,” he said.

“They were just kids. 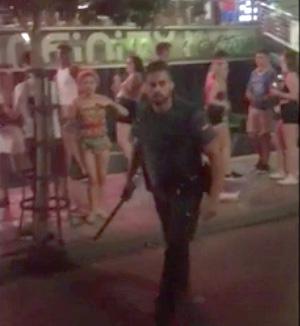 “There were two or three that were hitting people. They then called for back up, but the crowds weren’t aggressive or violent, they weren’t actually doing anything, only singing.

“There were people walking past who were getting hit. It was so aggressive.”

The 34-year-old said he saw one 17 or 18-year-old being beaten with a baton.
He was said to be so scared he came to him for help as he was older.

“It was a massive over-reaction by the police,” he said.

“Girls were screaming ‘what the hell has just happened?’

“The policeman knew it was an overreaction because he wanted me to delete the film.

“He went pale when he saw my battery die because he knew he couldn’t do anything then.

“I hid my phone down my pants. I was worried they would arrest me. 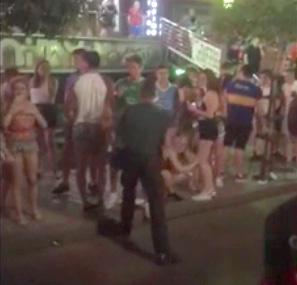 “They didn’t ask any questions, just got out the car, then bang bang bang.

“I come to the same place every year and I’ve never seen anything like this before.”