WHEN I was seventeen, I had a boyfriend who was a vegetarian.

My father – a macho, perma-tanned Robert De Niro-style character, automatically assumed he was gay, because ‘all real men eat meat’ and so when we broke up a few years later, it came as no surprise to him, because ‘David always batted for the other side anyway.’

David has been happily married for ten years now. To a woman.

Imagine though, my father’s horror upon discovering that his own flesh and blood would one day become vegetarian – or vej-ans as my father calls us, as he announces in dismay to our waiter at a family outing upon his visit last week.

“They’re vej-ans, can you believe this? I don’t know what I’ve done wrong! I’ve got children who are vej-ans!”

The waiter looks mildly amused and my siblings and I smile uncomfortably. This is my father’s noun; ‘The vejan’. Vegetarians are vejans, vegans are vejans, anyone who does yoga is a vejan and anyone who shops organic or favours homeopathic remedies over pharmaceuticals is also a vejan.

“My youngest is a university student, so it’s to be expected that she would

be a vejan,” he continues, in a lamenting monologue to the waiter. “But my Nattie, you cannot imagine how she used to love her meat. Even as a baby she would chew on a juicy lamb chop with gravy all over her chubby face!”

‘Oh save me’, I think, feeling the colour rushing to my cheeks, as the waiter looks meekly in my direction. “That’s not a problem,” he tells my father, “We have a wide range of dishes for vegetarians and vegans alike,” and my father nods while holding his head in his hands in mock despair.

I read a Facebook post this week that went viral about a young vegan holidaying in Malaga whose salad was not up to her expectations. But it was the comments underneath left me wondering why there is so much animosity towards those who have removed animals from their diets. 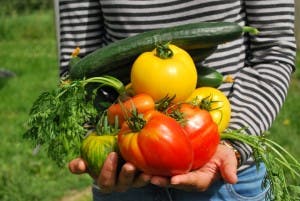 My father is not an exception – in fact, my father is like so many others who will not hear or accept anything other than what he has always believed. And this has nothing to do with meat. It has to do with change.

He believes that ‘vejanism’ is a trend, a fad, a fashion, while failing to realise that it’s a movement towards a more conscious way of living.

The movement away from meat products is surging – veganism alone has increased by 500% since 2014, spurred on my documentaries such as If Slaughterhouses had Glass Walls, Cowspiracy, Earthlings and the latest Netflix series to be taking the world by storm, What the Health.

Of course, my father refuses to watch any of these movies or TV shows – perhaps because deep down he knows that, were he to watch them, he might have to make a conscious decision about so many of his life choices and beliefs, after all, ignorance is bliss.

Social media has played a great role in spreading awareness, not only about the inhumane suffering of animals and the destruction of the planet, but also the antibiotics, puss and poisons we are inadvertently feeding our bodies. Is it any wonder that obesity, cancer and other fatal illnesses are at an all-time high despite medical advances, and that our bodies are sicker than ever before.

I suppose what people hate most about vegans is being preached to. And yes, many of them can seem preachy. It’s like carbon emissions, recycling and the volume of plastic in our seas… it’s an inconvenient truth.

And one that gets in the way of our comfortable existence – but at what expense? I know that with characters such as my father, preaching is of little good, so instead I send him links to documentaries shows such as What the Health, so that he is free to make up his own mind.

But sometimes the simplest wisdom comes from a nine-year-old boy, as I discovered last week, when The Monkey was asking for new ways to entertain himself (yes, the endless summer holidays are still ongoing!)

“I’d like to do some graffiti on walls,” he announced casually, and I reprimanded him explaining why graffiti is bad.

“Yes,” he nodded, “But I would just do a picture of a big dog and it would say ‘Would you eat your dog?’ That’s all I would do… and then people would see it and think about it.”
Food for thought indeed.