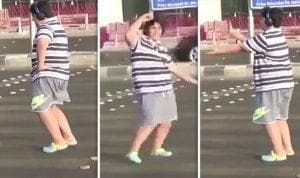 A TEENAGER has been arrested in Saudi Arabia after footage of him doing the Macarena on a busy street in Jeddah went viral.

The 14-year-old is being questioned after being accused of ‘improper public behaviour’, a statement said.

It is not yet clear what his nationality is and whether he will be officially charged.

The clip shows the teen disrupting traffic while performing the dance to the popular Spanish song, which topped charts around the world in 1995.

The lack of codified law in Saudi Arabia means officials and judges have a broad scope when dishing out punishments.

Social media users have branded the teen a ‘hero’, while many in the country have called his actions ‘immoral’.

Macarena is a Spanish dance song by Los del Río – a double singing act from Sevilla – about a woman of the same name.