BRITS spend most of their time in the car thanking other drivers and are more likely to play a game of ‘I spy’ than any other nation.

Drivers and passengers in the UK, Germany, France, Spain, Italy, Portugal and Poland ranked what they spent their time in the car doing.

Brits spend 29,750 hours in the car overthe course of their lifetime – that’s equal to three years and four months. 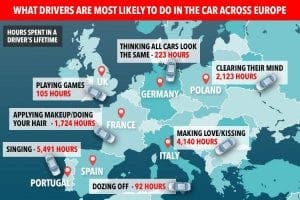 And they’re more likely to play games (105 hours), spot a wild animal (nine hours) and have a refreshing drink (3,920 hours) than any other European nation.

Meanwhile the Spanish love to sing (it’s their top driving interest) but also spend more than 1,000 hours worrying about having to fill up with fuel again.

The nation that invented the siesta also tops the list for dozing off – spending 92 hours asleep in the car.

Portuguese drivers are the most polite spending 6,596 hours saying thank you.

Amorous Italians have the most fun, topping the list for kissing and having sex in the car – they’ll spend over 4,000 hours over their lifetimes getting it on.