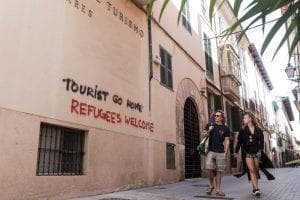 THEY arrive in their hoards every August to lay waste to our favourite beaches and beauty spots and bag all the best restaurant tables.

Then they’re back home, putting in fraudulent food poisoning claims to recoup the cost of their holiday, or dishing the dirt on TripAdvisor.

I don’t blame Palma de Mallorca residents for scrawling ‘Tourists go home, refugees welcome’ on the walls of their citadel.

You wouldn’t hear refugees complaining, ‘we had to queue outside with no air conditioning’ – one of the ‘claims’ received by British tour operator Thomas Cook. Were they seriously expecting a refund or do people forget to pack their brains when they go abroad?

Having spent the current month in my bunker distancing myself from the deluge, I did some armchair travelling myself and was flabbergasted to see what gets posted online.

Who would go to The Alamo and complain ‘doesn’t look anything like it did when the attack took place’? And how would he know?

Probably the same man who climbed to the top of the awe-inspiring Inca citadel of Machu Picchu in Peru looking for the perfect little Italian place: “The food here absolutely sucks,” he wrote. “The so-called pizza has horrible tasting llama cheese on it. No matter what they tell you, that’s what it is.”

I call it Ronald Reagan Syndrome after his famous quote: “If you’ve seen one redwood tree, you’ve seen them all.” Maybe it comes from over-exposure to the Discovery Channel but even the world’s wonders leave these types totally underwhelmed, as in these TripAdvisor gems:

Colosseum ‘There’s nothing inside’; ‘Need to renovate or shut down’

Taj Mahal ‘Spit stains. People sleeping, trying to write things on the marble … you are better off watching it on the net’

Although here’s one I actually quite like:
Sagrada Familia, Barcelona  ‘If you like the Kardashians (which means you have no taste or class whatsoever) you’ll probably love this monstrosity’

Such tourists leave no stone unturned – not even the Rock of Gibraltar – to vent their jaundiced world view.

Great Siege Tunnels ‘I personally didn’t think much of these tunnels, not like the ones in Jersey or Dover Castle in Kent England’

The Rock ‘Gibraltar is hell, what a horrible place. Poluted (sic), crowed (sic), bad food, interesting, yes, but in a morbid kind of way.’

Yep, not many of them can spell.

Of course, you have to understand the mentality and another delve into Thomas Cook’s complaints bag provides some large clues:

‘There are too many Spanish people’ (British tourist in Spain)

‘It’s lazy of the local shopkeepers to close in the afternoons. I often needed to buy things during ‘siesta’ time – this should be banned.’

‘The beach was too sandy.’

‘There was no egg slicer in the apartment’

‘My fiancé and I booked a twin-bedded room but we were placed in a double-bedded room. We now hold you responsible for the fact that I find myself pregnant.’

They walk amongst us and they vote. They probably voted for Brexit …