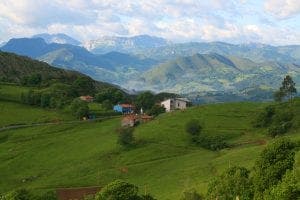 THE first time we ate at Casa Marcial we literally stumbled across it on a muddy hike around inland Asturias.

It appeared at the top of a steep hill like a ray of sunshine after a storm … a magical spot in a tiny hamlet with marvellous views of the soaring Picos de Europa mountains in the distance. It needed a double-take to notice that the small stone cottage had a menu on the door. 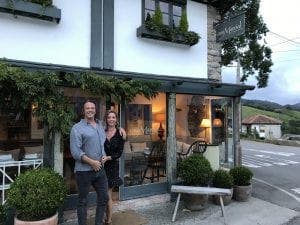 On closer inspection, it jumped out as both original and good value. While we’d missed the midday service (we’d already wolfed down a packed lunch, in any case) we were suitably inspired to pop in and book for that evening. And what a joy it turned out to be, with its young chef Nacho Manzano not long in the kitchen and a year or so before winning his first Michelin star. 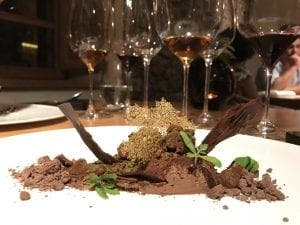 The food was fresh, the service charming and Nacho himself was personable and engaging. We returned to our simple rustic hostel that night noting that it had been the highlight of the holiday.

Fast-forward two decades and we are being chauffeured from – ironically – the very same hostelry, now an incredible five star spa hotel called PuebloAstur. This time we’re clad in our glad rags and have a reservation, made three months earlier via the website. Casa Marcial is an entirely different prospect today. 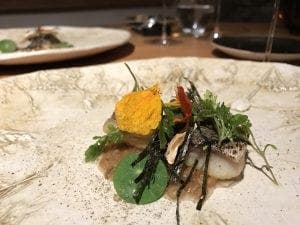 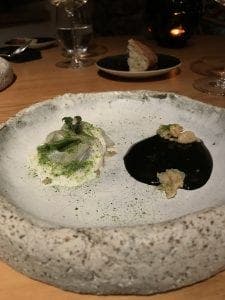 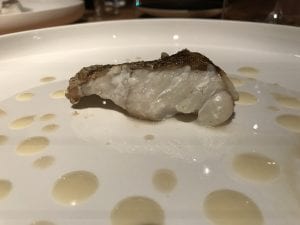 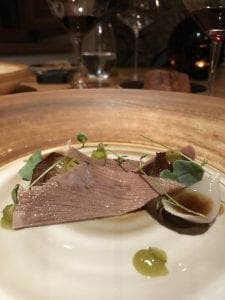 Manzano has been dubbed the region’s top chef with two Michelin stars here (the only one in Asturias) and another in nearby Gijon. The small stone cottage has been spruced up with a Guggenheim-style extension jutting out back. Now part of the upmarket Relais & Chateaux chain, it has all the attractive flourishes you would expect from a two-Michelin starred joint, inside and out.

The lighting is fabulous and the decor more contemporary, yet it has managed to hang onto its original rural charms, much of this thanks (it is said) to a certain Scottish designer who spent a couple of years living nearby. The main changes have been to the menu, which is creative without losing its soul and still very much part of its surroundings. 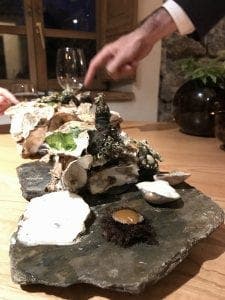 Described as being ‘neither traditional, nor vanguardista, neither from the sea, nor the mountain… but a mix of them all’, probably best sums it up. What you eat at Casa Marcial is in every way up there with the celebrated dining temples of San Sebastian and Girona.

It is just not so fussy, nor so grand, and it’s kinder to your pocket! Broadly, you have a choice of two set menus: a traditional one, called the ‘roots menu’, and a more modern seasonal version, known as the ‘horizontal menu’.

And, best of all, you can divide both in half – advisable at night – and end up with nine courses instead of around 15, for €98 including IVA. Our culinary journey started with the most remarkable seafood spread, hidden in a rockpoolstyle presentation in which a clam, a mussel and a whelk were lurking.

It continued with a ceviche of avocado with the peel of sardine, which was tasty, followed by an enoki mushroom with squid and ‘soil ink’, which sounded odd but hit the spot perfectly, rich in both flavour and originality. An eel served with ‘scanda’ wheat was delicious while the grilled grouper, served with edible flowers and mixed leaves, was cooked to perfection. 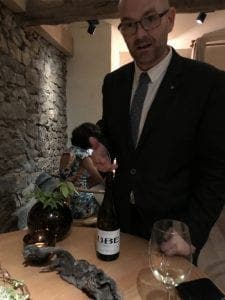 Easily the strangest dish of the night was the cow’s tongue served with lentils and a mole sauce (that’s the chocolate version, not the furry animal), but it was also one of the finest. However, it was trumped – and it is rare that I say this – by an amazing chocolate, mint and passion fruit pudding, washed down with a fabulous 10-year-old Madeira.

On the subject of wines, I am not normally a big fan of ‘maridaje’ wine pairing but on this occasion we succumbed to the charms of the sommelier. A massive fan of sherries, he explained how brilliantly they worked with the seafood/mountain mix of Nacho’s food.

It was hard to disagree, particularly with the amazing saltiness of the boutique UBE wine from Bodegas Cota 45 in Sanlucar de Barrameda, a perfect partner for the seafood starters. Other standout wines were the bone dry El Prohibido from Ribeira Sacra and the Portuguese Vertice Gouveio 2008. The red Massuria 2013 from Bierzo complemented the cow’s tongue to a tee.

All in all, it is great to see that the changes at Marcial haven’t affected the food. Who knows, if the quality keeps up, Nacho could be heading up Asturias’ first three-star restaurant anytime soon.

On the mend: How a post-Covid full health check revealed some surprising results