San Pedro is better than ever, on fire… just look at the boulevard, it’s so busy these days,” explains Wolfgang Schlesier. 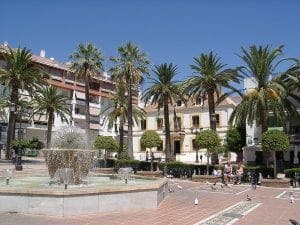 “It is one of the main boom areas on the coast.” And he should know, having worked in real estate in the area for 35 years. His company Casa Marbella, which has an office just off the brand new Boulevard, has seen some enormous changes over that time. “The main one of course was the tunnel,” he explains.

“It might have taken 12 years to finish, but it is really paying off now.” In the heart of the so-called ‘Golden Triangle’ of Estepona, Benahavis and Marbella, San Pedro is an enviable place to buy a home or start a business. It is well connected and has good infrastructure, now that the decade-long urban rejuvenation project has been finished.

“I live next door in Guadalmina, which is a real paradise, so I have the best of both worlds,” says Wolfgang who first visited Andalucia on holiday in 1973, while dictator Franco was still alive. Then just 23, he quickly fell in love with the vibe of the coast, that was then one of the hippest places to live in Europe. 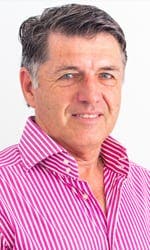 “I got Marbellitis,” he explains. “Just fell in love with the place and after a three year trip to Caracas, where I learnt Spanish, I happily moved here.” Over the next few decades he mixed with the movers and shakers on the coast, first starting to work in real estate in 1981 in a company called Investasol (empowering individuals towards global change), alongside an English partner Graham Tullah.

He later launched his current agency Casa Marbella in 1992, which at its peak had four offices spread between San Pedro and Elviria. The staunch Buddhist – a regional organiser for SGI – is a spiritual man, who exudes a warm persona. “It has changed my life and helped me find my sense of spirit and place,” explains the father-of-four.