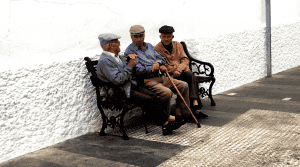 MOVING to Spain brings its fair share of challenges; whether it’s learning the language or finding out how to dispose of your dirty cooking oil (I’m still trying to figure this one out which is why our kitchen contains enough full five-litre bottles to fuel a car for a year!).

One of the biggest adjustments, for me though, is the pace of life. Everything is slower, from eating meals to the speed we walk at.

I moved from the northeast of Scotland to the midlands of England in my late twenties.

Those last few years in Scotland were spent in a sleepy village only 40 miles from Aberdeen but, what felt like, 40 years in the past.

I had lived and worked in Glasgow and Edinburgh before that, so I wasn’t like some naive country-mouse moving to the big city. Still, nothing could have prepared me for the speed at which life was lived in England.

My first experience of London was a mind-blower! EVERYONE is in such a rush!

Tourists race around trying to cram in as many sights/selfies as they can.

The businessmen and women wear their suits like armour, battling their way from point a to b in the shortest, most direct path back to the grindstone.

And then there was the tube… the horror! Having caused sighs and eye-rolls by taking too long at the ticket barrier – thus holding up the hordes by an extra few seconds – I nearly caused a riot when I stood on the ‘wrong’ side of the escalator!

I lived in England for 13 years and adapted to the quicker pace quite easily. For a while, I was a willing participant in the rat race.

Not old I know but, I realised, best case, I would have another 20-odd years of sprinting before finally being allowed to step off the hamster wheel.

This mid-life epiphany (it wasn’t a crisis – that’s when you buy a sports car) came to me whilst sitting on the beach, right here in Spain.

I had always wanted to move here and it just felt like I was running out of time to live the kind of life I’d dreamt of. I wanted to enjoy Spain now, not wait until retirement.

So, fast forward, to us living in Spain and it’s everything I dreamt of. Of course, it hasn’t all been plain sailing, but the cons have been few and the pros are immeasurable.

We have settled in to our new life and community like the proverbial ducks in water.

I can now make a pretty mean croqueta de pollo and get through whole conversations without having a brain-fart where I forget every Spanish word I know!

We’ve learnt from our neighbours to clean our floors in the morning before it gets too hot and eat long, slow meals on the balcony when it’s cool at night.

We have adapted to the changes that a different country presents and feel very at home here.

But, we know we won’t have truly ‘gone native’ until we learn to fully embrace the mañana lifestyle.

All those years of clockwatching and being in a hurry is hard to let go of.

I envy my Spanish friends who can just make loose plans while I’m still *sigh* more comfortable with a firm time and brief itinerary.

It takes a while to get used to the fact that life doesn’t have to be lived at high speed; to take pleasure in simple acts again like eating for enjoyment not just gulping down food for fuel.

I’m not saying there aren’t financial pressures or everyday stresses in Spanish life, but here at least, life is lived at more of a leisurely stroll than an all-out sprint to the finish.

Along with the sunny climate and Mediterranean diet, it’s no wonder there’s only 0.2 years separating Japan from Spain as the country with the longest lifespan (you can read more about that by clicking here).

And (judging by the age and fitness of a large percentage of the locals) I’m starting to think, we could all learn a lesson in taking it easier. Maybe slow and steady wins the (human) race.