FEARS are growing for a missing British dad last seen at Malaga airport two days ago.

It comes after his partner Gemma Clements, first reported by the Olive Press, appealed for information on his whereabouts yesterday afternoon.

She said:”Yesterday evening my partner refused to board our flight home from Malaga to Manchester and ran away as we were boarding. He is called Brett.

“He only met one person in benalmadena, a man called Danny from Malarkeys. 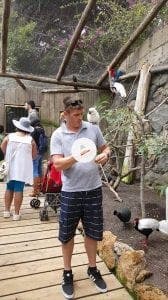 “Can anyone get me in touch with Danny to see if he has heard from him or whether hes helping him.”

She added that their young daughter is ‘heartbroken’.

“We have a four-year-old daughter and she’s heartbroken as am I, We need to know Brett is safe and make arrangements for him to get home!”

She added: “He has no clothes, money, food just a passport and one packet of cigarettes.”

Gemma says there is still no news and she has become extremely concerned.

She has shared another photo of Brett and one of the watch he was wearing when he was last seen.

She says his bank account has not been touched, leading her to have serious fears about his whereabouts.