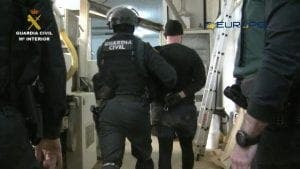 Some 18 suspects have been cuffed in raids near the factory and in Malaga, where the cigarettes were sold and distributed.

The factory saw a €3 million investment from crime bosses, including the more than ten tonnes of tobacco leaf and four tons of tobacco.

According to Guardia Civil, the factory had the same production levels similar to any other legal factory and even had its own packaging process.

It had already made at least 4.5 million cigarettes when it was busted.

The group had created their own brand with specially created packaging and had intended to sell the product on the black market.

The workers were tobacco experts and worked more than 12 hours per day with low health and safety standards.