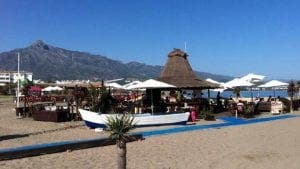 A MARBELLA chiringuito owner has been fined €10,000 for ‘illegally extending’ his beach bar.

The owner of a Llevante Beach Club must pay €5,400 to the town hall after he knocked down and rebuilt his popular eatery on a licence that only allowed for ‘minor renovation works’.

He must pay a further €4,320 penalty for breaking the law.

A Malaga court blasted the works for building on protected land.

The owner asked for permission to extend the property in 2006, and was given the green light in 2008.

But the works, which began in late 2009, saw the bar be totally knocked down and rebuilt, exceeding the limits of the licence.

Authorities repeatedly called for the works to stop, but the owner refused to comply.

The court has sentenced the boss to a year-and-a-half prison sentence.